Repost from Saints and Scpetics

Are laws which restrict abortion – terminating an unborn child in the womb – immoral? According to a recent campaign by Amnesty International – and an advert read by Liam Neeson, the very voice of Aslan- laws which protect the unborn child are outdated, written for another time and place. (Those who want a taste of the row that has brewed can view the original video and the parody it inspired below).

In an attempt to generate a little more light than heat, we offer he following arguments and suggest that Amnesty International is quite wrong: it is neither immoral nor irrational to restrict the practice of abortion. 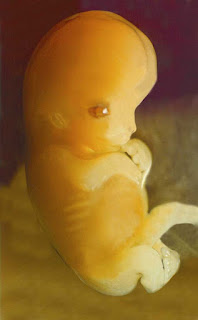 One: Philosophical arguments aside, modern science has given us remarkable insight into the developing child.   Consider the child’s heart. Barely a fortnight after fertilization the heart is forming. By the next week the heart will divide into chambers and start beating. Or consider the striking images which show us that merely six weeks after conception the unborn child is recognisably human.This image of a vulnerable human being calls for a humane response. We cannot achieve social justice by deliberately dismembering innocent human beings.

Two: Abortion is often justified on the grounds that an unborn child is not an individual; it is a foetus and not a baby. The foetus has no wishes, ambitions, desires or emotions: it lacks a personality. If no individual personality exists in the womb then abortion violates no one’s rights. However, we should not lazily equate personality with personhood. A human can lose their personality – while in a coma, say – yet remain a person (a personal being). All humans require, at various times and for various reasons, care, nurture and protection, being on occasion unable to fend for themselves. These needs ground universally acknowledged rights which can be applied to all: all, that is, except the unborn. Why should they be excluded?

Three: It is not at all clear that the unborn child does not have a developing personality. Everyone can agree that the human personality is inextricably linked to the human body. And all the information required for the on-going development and formation of that body is already contained in the fertilised human egg. Many of our present attributes were shaped within the womb- for example, the unique features which make up your face began to form only four weeks after your conception!