Does the Pro-Life Movement Want to Punish Women?

Repost from Russell Moore at RussellMoore.com 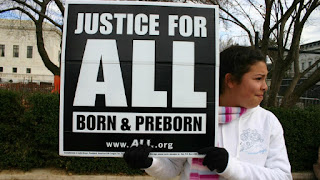 This week Donald Trump caused another stir in national news, and this time, it was for his comments on abortion. Asked if pro-life activism wants laws to punish women who receive abortions, the Republican candidate said that, although he wasn’t sure about the details, there “probably” needed to be some civil penalty for women who get abortions. The comments quickly drew intense backlash from both pro-life and pro-choice groups (something not easy to do), and Trump later “clarified” his comments by saying that women who get abortions shouldn’t be punished.

Regardless of whether or not Trump’s comments come from a genuine and convictional pro-life worldview, all pro-life Americans need to make this issue clear: Protecting unborn babies is not about punishing women, but punishing an industry and a culture that dehumanizes human beings.

One of the worst misconceptions about pro-life Americans is that we are pro-baby and anti-women. Unfortunately, the pro-life movement hasn’t always done a good job of defeating this notion. It’s true that some rhetoric on our side has lacked compassion and holistic concern for the well-being of mothers, especially unwed moms. But despite our imperfections, the pro-life movement has indeed been remarkably consistent about our desire not only to tear down abortion culture but to build a culture of life and human flourishing in its stead. This is the conviction that has built thousands of crisis pregnancy centers, funded hundreds of adoptions., and come alongside countless numbers of women, and men, with practical acts of mercy and love.

Pro-life Christians understand that abortion isn’t just a physical attack on a baby; it’s a spiritual assault on a mother too. The well-known billboard that says “Abortion stops a beating heart” would be more accurate if it said, “Abortion stops two beating hearts.” Abortion is sin against God and child, and it is also sin against women, one that assaults and deadens the moral conscience.

Many of the women who walk into their local Planned Parenthood clinic are not activists. They’re not ideological foot soldiers in the culture war. Rather, many of them consider themselves to be pro-life, and more than a few are Christians. For them, the abortion clinic appears to be an escape route from a life of unbearable shame, secrecy, and hardship.

But these women are being lied to, and their consciences are under assault under the accusations of the Deceiver both leading up to and following an abortion…